Exhibit sure draw for hockey fans young and old 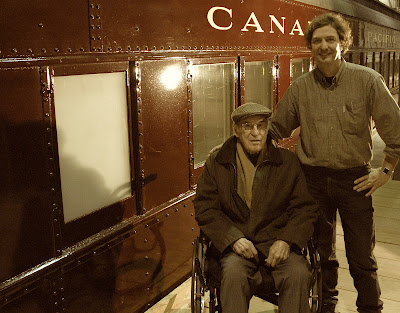 Émile "Butch" Bouchard and Richard Leclerc pose at the Train Museum in Saint-Constant, where the old-timers spent the day reminiscing.
Photo : Julien Archambault-Leclerc

Kids will do almost anything to see their heroes. Today it's hours in line to get a ticket for a rock concert. Fifty years ago, Brome-Missisquoi youngsters braved the winter's cold in the middle of the night to catch a glimpse through a train window of the hockey greats. >In the forties and fifties the passenger trains still went through Sutton, it was on the route to Boston and the train the Montreal Canadians hockey team took from a Saturday night game at the Forum to a game the next night in Boston," said Richard Leclerc.

"The train went through about 1 am. The players would be drinking beer, smoking cigars, playing cards - having a great time, the passenger car full of smoke. The train would stop about 20 minutes to fill up on water, because of the steam engine, and the platform would be full of local kids. There was no TV hockey in those days. The kids just lived to see their favorite players, and looking in those train windows was the only chance they got."

Inspired
One of those kids, Richard Mireault, now President of the Sutton Museum, told Leclerc the story last summer. "I was inspired. We were looking for ideas for special exhibits to bring people into our museum from the whole region, something beyond our regular displays that would keep people coming back and something to make it worthwhile opening in the winter. And what better exhibit with Les Canadiens celebrating their 100 Anniversary this year."

Thus was born 'The Canadians Pass through Sutton - on the Train!' an exhibit that honours both the hockey players and trains of yore. Leclerc contacted some of the old-timers, legendary names like Bob Fillion and Emile Bouchard, who were delighted be involved and lent their extensive personal collections of memorabilia, clippings and photographs. CP and CN helped with the train aspect of the retrospective.

Saint-Constant
In December, Richard Leclerc took a group of old-timers to the Train Museum at Saint-Constant where one of the cars the boys rode is on display. "The players loved it and we shot a video, about 15 minutes of them and the train reliving some of those trips - it's part of the exhibit.

"We show what the life of a professional hockey player was like from the mid-1940's to 1964. We've even recreated Maurice Richard's living-room," said Leclerc. "By 1965 the hockey teams stopped travelling by train. There's no station in Sutton anymore, a few trains go through, all freights, and they don't stop. What we've done is show an important and nostalgic chapter in our history".

On January 16, two-time Stanley Cup winner Bob Fillion, Sutton Mayor Ken Hill and MRC prefect and Cowansville Mayor Arthur Fauteux helped Leclerc and Mireault officially open Canadians... on the Train in the presence of Pierre Bouchard, an othe retired player. The exhibit continues at the Sutton Museum, 30A rue Principale, Sutton, open to the public Saturdays and Sundays from 1 pm to 6 pm, until March 29. Entrance $5 for adults, $2 for children under 12 and $10 for families.
Publié par Richard Leclerc, Publici-Terre à mercredi, janvier 28, 2009 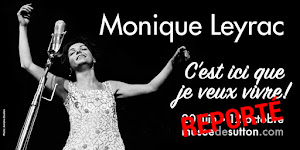 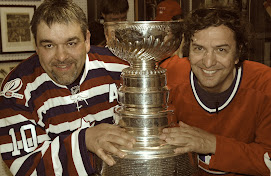 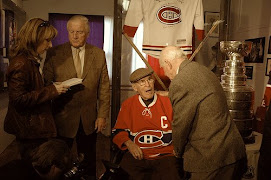